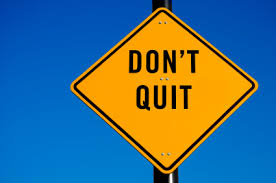 It’s not OK not to try.  This is what I tell my kids when they’re confronted with a task they believe is too difficult for them.  But how many times do I avoid doing something hard because I’m afraid of failure?  Or, once I’ve started the hard thing, how often do I get dangerously close to quitting when I bump up against a proverbial brick wall?

Too often, if I’m honest.

I’m working on a second novel.  I’m still in the beginning stages, and already I’ve hit snags that leave me perplexed and discouraged.  I knew this would happen before I ever started (it’s the nature of the beast), but the resulting feelings well up in me just the same:  I want to bail on this project.

This realization is discouraging to me.  Why am I still struggling to stick things out, to keep going, to silence the voices of opposition after all this time?  Why am I tempted to not try, or worse, to try and then to give up?

I don’t know.  I hope that, in time, I’ll grow up and leave behind the temptation to quit on hard things.

But what if I don’t?

If I don’t, the solution to the problem is the same–for my kids and for myself:  keep going anyway.  If a thing is worth it, if, in the quietude of saner moments, we’ve decided that it’s of real value, then it must be attempted.

4 thoughts on “On Not Quitting the Hard Things”

I'm a writer, traveler, and mom/teacher to three great teenagers.

Looking For Something Specific?

You can reach me at hannahvanderpoolbooks@gmail.com